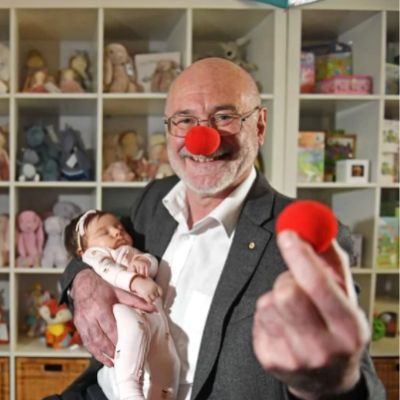 He is also Chair of Pathology at The University of Adelaide and Senior Specialist Forensic Pathologist at Forensic Science South Australia.

Here Professor Byard describes the evolution and future of SIDS research and what motivates him to keep looking for answers.

Like you, I believe that no parent should ever have to see their child die and say that final heartbreaking farewell to their little one taken suddenly and way too soon.

I remember my first paediatric autopsy patient very well. It was 1984 and her name was Genevieve.

Genevieve was so small when her little life was cut short and her parents had to say their final goodbye.

The experience of Genevieve and knowing the grief that her family was going through had a profound impact on me, as it does for everyone in our community.

For over 30 years now, I have been part of Red Nose as a researcher, pathologist, advisor, and counsellor to families – dedicating my career to understanding and helping to prevent babies and children like Genevieve dying.

And the thing that keeps driving me forward, is the desire to stop little lives being cut short once and for all.

I do it for Genevieve and her family, and all of the families who have lost treasured babies.

But this year, 3,000 more families will be devastated by the sudden and unexpected death of their baby or child. This has to stop.

As you know, Red Nose has been working tirelessly for the last 40 years, funding vital research and delivering life-saving safe sleeping education – all with the goal of saving little lives.

Every day, we are working towards our goal: a future where ZERO babies and children die suddenly and unexpectedly during pregnancy, infancy and early childhood.

Your past support has already helped fund over $18 million in research into sudden infant deaths and stillbirth – saving over 11,000 babies’ lives.

As well as reducing SIDS by over 85%, we have also made great headway in understanding and preventing stillbirth, by identifying many of the risk factors that now inform our life-saving education programs – all thanks to the money raised on Red Nose Day over the last 30 years.

But with nine babies and children still dying every day, there’s a lot more important work to do to reach ZERO in our lifetimes – and we need your help to get there.

No parent should ever have to see their child die and so I have worked for many years to help understand and prevent a wide variety of lethal diseases and conditions.

This research has led to many scientific papers and four text books on paediatric forensics and Sudden Infant Death Syndrome (SIDS).

In the past we considered SIDS to be a disease with a single cause. Nowadays we understand that it is really the end result of the interaction of certain babies with their environments.

This is very well summarized in the “triple risk” model which says that certain vulnerable babies exposed to environmental hazards, such as sleeping face down and cigarette smoke, particularly between the ages of 2-4 months, are at increased risk of sudden death.

By understanding that SIDS is a complicated disorder composed of a number of distinct subgroups of babies, we have been able to understand it better and take very successful steps to reduce the number of these tragic deaths.

Currently, SIDS rates vary greatly among countries, but we have seen a very satisfying fall in numbers in Australia from around 2-3 deaths per 1000 live babies to around 0.1 per 1000 babies – which is around 24 deaths a year today.

To give a local example from South Australia, the annual number of deaths in the 1980s was more than 50 per year compared to just 1-2 deaths per year now.

While it is likely that certain genetic factors play a role in contributing to some SIDS deaths, we do know that there is no “SIDS gene”.

Repeated deaths in a family could well be due to genetic factors, but these are more likely to be inherited cardiac conditions or a rare metabolic illnesses. Following siblings may be at an increased risk, but this is mainly if environmental factors such as exposure to cigarette smoke are not modified.

The next important area of SIDS research involves studying the brainstem – the part of the brain that controls our breathing and heart rate.

Exciting research in this area in recent years has focused on a chemical called serotonin which appears to be reduced in certain SIDS babies. This means that they are not able to respond to environmental challenges as quickly or as well as other babies.

Perhaps even more exciting is our own work in collaboration with Harvard University looking at a chemical called substance P. We have found that this can be significantly reduced in areas of the brainstem that control head and neck movement.

This could explain why babies who die of SIDS in the face down position have not just moved their heads to a safer position on the side – they may have been not be able to.

The future of research will involve examining brainstem chemicals more clearly and determining whether deficiencies are linked to genetic markers.

It may then be possible to test for these specific genetic defects in babies to help us identify those who have a much higher risk of SIDS.

My work is greatly rewarding and I was very honoured to receive the International Distinguished Researcher Award from the International Society for the Study and Prevention of Perinatal and Infant Death (ISPID) in 2016 for outstanding contributions to SIDS research.

As a researcher, I find contact with families is vital so that they have the chance to ask questions and talk to the doctor who looked after their baby or child after their passing.

I had a mother contact me a couple of years ago to talk about her daughter who had died 25 years previously. This type of interaction makes my work so worthwhile.

For over 30 years now, I have been associated with Red Nose (formerly SIDS and Kids) at state and national levels as a researcher, pathologist, advisor, and counsellor to families.

It has been one of the very great privileges of my professional life to be associated with Red Nose and all its associated people who have genuinely, consistently and very generously committed so much of their time and passion to this cause.

Our mission to reach ZERO starts and ends with each one of us stepping up and coming together to support this life-saving vision.

And that’s why we need your help this Red Nose Day. Please join with us so we can stop little lives being cut short and truly build a future where no family experiences the devastation of burying their child.