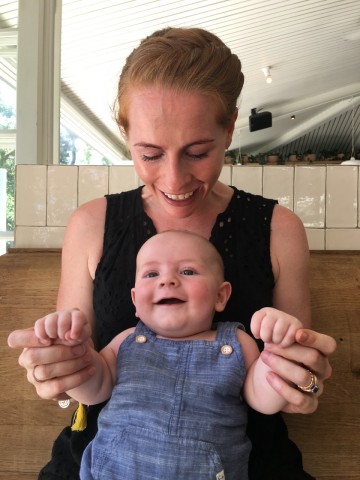 Our gorgeous boy Sebby lit up our world like any first born would. He was chubby, sweet and enchanted everyone he met. He was calm and loving and had eyes that smiled sunshine. We never expected that he would die.

Sebby was a healthy baby until at six months, he had a severe seizure. Over the next few months as seizures persisted, he was diagnosed with an extremely rare genetic condition.

His genetic error, HCN1, was so rare that only 60 children have been documented with this across the world in the last ten years. At that time, only one toddler in Australia was living with the same condition. This meant that with such little research and information, we had no clue what his future was to hold.

This uncertainty, in our minds, never meant that we expected him to die.

The shock of child-loss is deep and all consuming. We were, and are, devastated without him. Grief is a dark place.

When we lost Seb, we had no awareness of how often children die unexpectedly in Australia. Perinatal and child loss are more common than most people know. Now that we are a part of this open-armed community, we have met so many incredible families climbing the same internal mountain of loss.

I appreciate Red Nose Day because it is an opportunity to shine a light on child loss and make people more aware of what families like ours go through when they lose a baby or child.

One of the biggest hurdles to overcome when facing fresh grief, is for families to understand that they are not alone. Red Nose services offer a safe place, a community for parents and grandparents to come without judgment and hear stories of other families who give them hope and light. The hope that one day they may feel joy again.

The value of that hope is immeasurable.

Red Nose Day raises funds for research and the support services on offer which improve the outcomes for families who face a child loss.

The 24/7 support line, the peer group meetings and social support, allow parents who have lost a child to reframe the grief and carry it with them in a more positive way.

The way the Red Nose community nurtures bereaved families and supports them through the years after their loss is a gift that often families won’t realise the value of until much later.

We celebrate the memory of our Sebby, in the same way we celebrate his little brother and baby sister who have joined us since he died. We are so proud that we get to tell his story and keep his memory alive.

* I share more of Seb's story and the resources that helped me immensely at www.thegriefyway.com