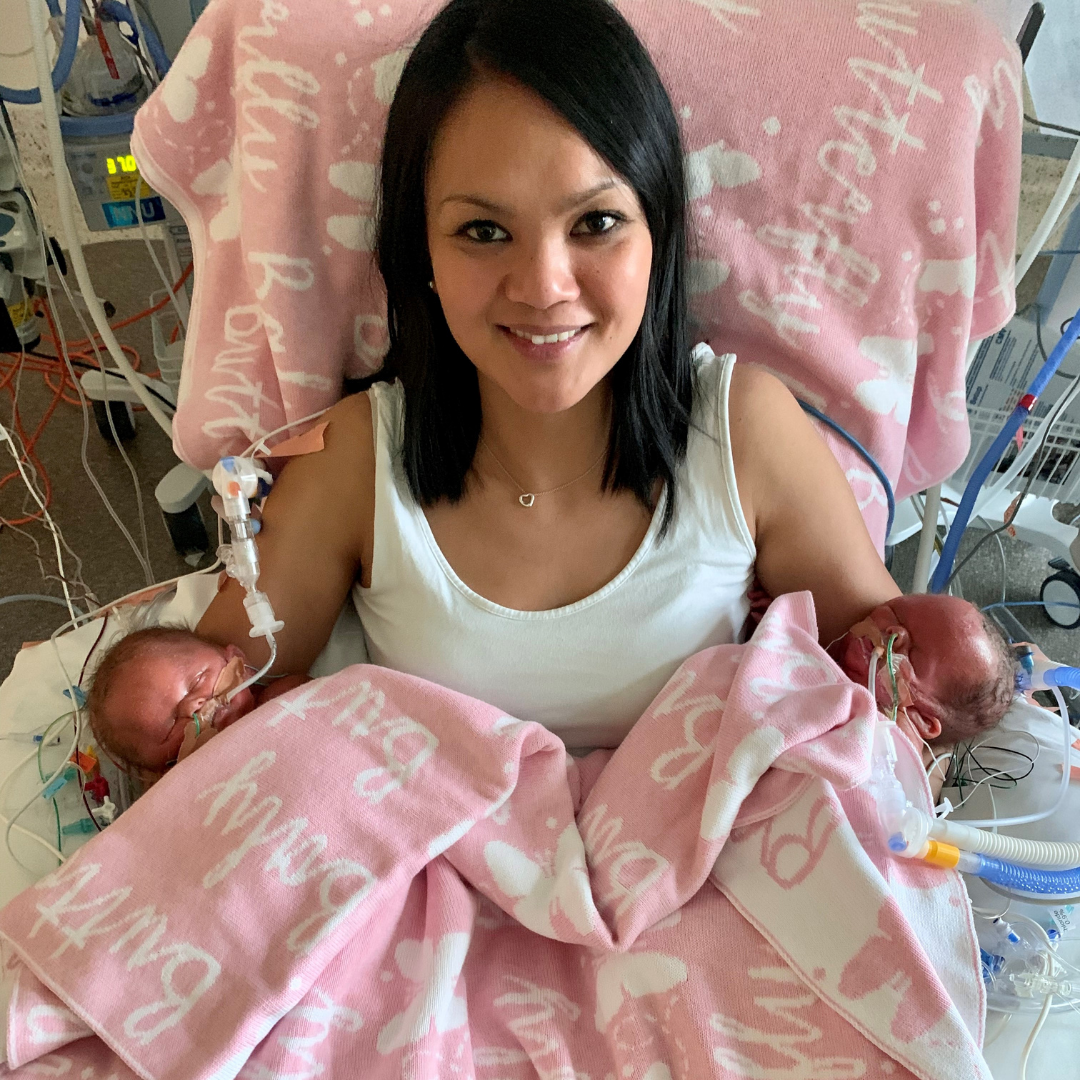 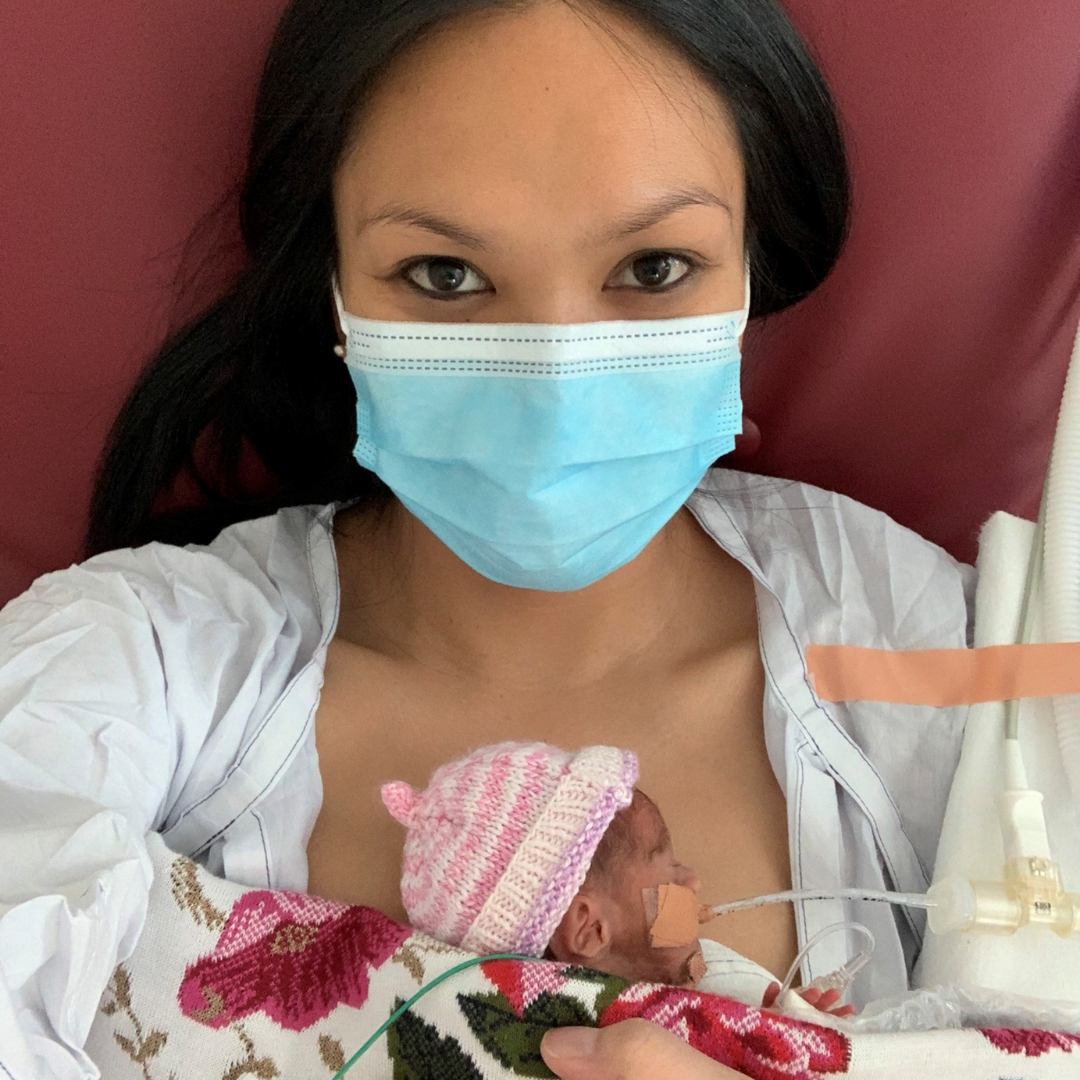 When our son Lucas was two years old my husband Paul and I decided we were ready to grow our family. I fell pregnant with identical twin girls. Lucas’s pregnancy and birth had been absolutely perfect but this pregnancy was complicated from early on. The girls both showed signs of growth-restriction and I also developed pre-eclampsia and was admitted to the Royal Women’s Hospital, Melbourne. I had been at the hospital for two weeks when they were born prematurely at 29 weeks and 3 days in June 2019. We named our girls Lia and Andie.

From the beginning of their lives, they were really sick, not only because of their prematurity. In the NICU, the doctors did countless tests trying to establish a diagnosis. At 2-3 weeks of age the girls began to deteriorate and were transferred up the road to the Royal Children's Hospital.

We spent five weeks at the RCH, with more tests, including extensive genetic testing, but nothing was coming up.  There was no definitive diagnosis and no cure and it became clear that the girls were not going to survive.. We had to make the decision to turn off their life support. Lia and Andie died in our arms when they were 8 weeks old. They’d spent their whole lives in the NICU ward. They never got to feel the sun, or fresh air on their beautiful, little faces.

For those 8 weeks our lives had revolved around a routine of waking up, getting Lucas ready, taking him to daycare, driving to the hospital, spending all day there with the girls before coming home in the evening and trying to keep things as normal as possible for Lucas, as hard as it was to leave them.

Then all of a sudden there was nothing and the girls weren’t here anymore. I remember sitting on the couch with the winter sun coming through the window and just going ‘what am I supposed to do?’

Our amazing social worker at the RWH had referred us to Red Nose after the girls died. Some days when Paul was at work, I called the support line when I felt overwhelmed in the middle of the day.. I’d call the number and someone would just always be there. Sometimes it was another parent and sometimes a counsellor. That really helped me – just having someone to talk to, and help get me through those really emotionally overwhelming times.

We also connected with a Red Nose Counsellor – Zelinda – who really became my lifeline. The most important lesson she taught us was how different we were going to grieve. That has been a saviour for our relationship, helping us to understand and support each other during the really difficult times. She also helped prepare us for, and support us through all the other difficulties that come with loss and grief:family & friendship impacts, returning to work, anniversaries and so much more.

After Lia & Andie, we felt a huge hole in our lives and we were both so determined to make our lives bigger than our girls’ deaths. We couldn’t believe that was it for us, so we started talking about getting pregnant again and consulted with many of the doctors who were part of Lia & Andie’s care. At the time the girls died the doctors couldn't give us a diagnosis, but they were able to have discussions with an expert in the US who confirmed they likely suffered from gestational alloimmune liver disease, or GALD. It’s an immune condition where my body creates antibodies that attack my babies’ livers. My first pregnancy with Lucas had likely triggered the response.

We found out that there was a treatment in pregnancy that had a really high success rate, so when we fell pregnant again, we were hopeful. I started the weekly treatment at 14 weeks and it felt like it was working. Then at 19 weeks scans showed the baby’s growth had slowed from the 50th to the 20th percentile. It was then I started to feel that things weren’t good.

The baby’s growth continued to slow, and then at 22 weeks I was admitted to hospital with a dilated cervix. And at 25 + 5 weeks in July 2020 our baby girl Elle was born prematurely. During the first week of her life the doctors were trying to figure out whether they were dealing with a normal premature baby or whether we were going down the same path we did with Lia and Andie.

Like her sisters, Elle was eventually diagnosed with liver failure. She had not responded to the treatment. Tragically, we had to make the decision to turn off her life support, too. Despite being in the middle of a Covid lockdown in Melbourne, we were able to bring her home, and she died in my arms surrounded by her dad and big brother at 15 days old.

It’s been ten months since Elle died and it’s been hard. But life is beginning to feel hopeful again. I can no longer carry another baby, but we’re exploring surrogacy and that is giving us hope that brighter days are ahead. Nothing can change what has happened in our lives and nothing can bring the girls back, but we are looking forward.

Lia, Andie and Elle will always be a part of our family. They are also a part of our everyday life. We have photos of them in our house, and Lucas says goodnight to them each night. Every time we see three birds together or pink, purple and red, their colours, he’ll talk about them. He loves his 3 baby sisters, and he knows they live in our hearts now.

I don’t know where we would be without Red Nose’s support. Our counsellor was there for us when Lia and Andie died, and supported us through my pregnancy with Elle, her life and her death, and she’s still supporting us now as we go down this new path of unknowns. That's why we're fundraising for Red Nose Day this year. To support our fundraiser visit